Home Blog Valiantys ShipIt: the winner tells all (part one)

Celebrating with the Valiantys ShipIt

As part of celebrations for the company’s 10th birthday, we all took part in the first every Valiantys ShipIt, a 24-hour competition to deliver something new to the Valiantys team, our customers or both. Having participated in a quite a few hackathons before, I was extremely excited to take part.

Before we started, we had to gather a team together and submit a shipment order – a brief description of what we intended to create, and what problem it would solve. Luckily for me, this wasn’t my first time doing this kind of competition. We needed to choose something that we were certain we could create a working prototype for, but also provided some kind of use. This balance is quite tricky – pick something too easy and you’ll have no issue finishing in it, but you will have difficulty impressing people when it’s time to vote. However if you choose something too hard, there’s a good chance that you’ll have nothing to show for it at the end of the 24 hours.

We decided to create an application to help people who have just completed a Valiantys training course. There’s an awful lot of information that goes into learning how to administrate JIRA, and after two days of intensive training, there’s a huge reliance on hand-written notes and copies of the slides. My experiences with applications like Duolingo and Memrise told me that we could help people commit more of this information to memory by allowing them to practice a little each day.

Our team consisted of three consultants – Gael, Larbi and myself, along with an enterprise account manager, Bertrand. Between the four of us we encompass a wide range of skills, and so we decided to focus on delivering our aim in two ways – a web app that people can access on desktop or mobile, and a native iOS app that would work offline.

We arrived at the venue on the day, had a meet and greet with the rest of Valiantys and enjoyed a good lunch before grabbing some coffee and getting down to work. The first thing we had to do was discuss who would do what – and make sure everyone was confident they could get their tasks completed in time. 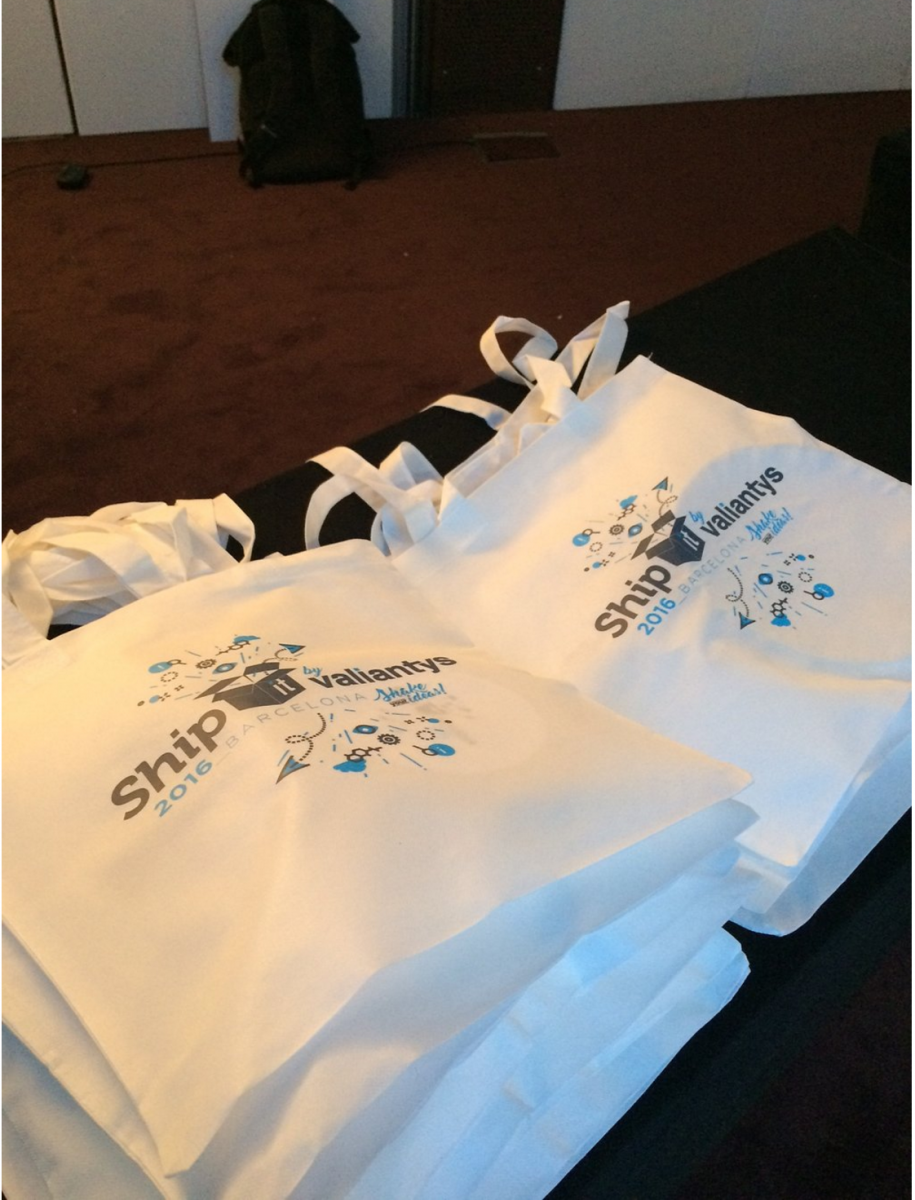 Because we had varied skills with very little overlap in the key areas, it was easy to divide of all the work required. Larbi took on the web app whilst I worked on the iOS app. Bertrand backed us up by going through our training guides and creating questions for us based on the content – as well as putting his sales flair to use by handling the final presentation. Finally, Gael rounded out the team by doing the legwork of converting the questions into database-friendly formats for Larbi and myself to consume in the apps, as well as handling design details for us to aim towards.

As we kicked off, I was very confident that barring any unforeseen disasters, we would be able to complete all our goals comfortably. Not all of us were though – Bertrand stared at me wide-eyed and said we were attempting the impossible. This was actually a good thing – it made me more determined to succeed and prove a point, and for Bertrand it pushed him to work harder because he knew we had a lot to do.

Rather than committing to a full schedule upfront, we marked some key things we needed to look at – tools down was at 11am, so we marked 9am as time to start wrapping up and focusing on the presentation. It was already 2pm, so we took an hour to get started with the basics like setting up our environments and getting the basic frameworks started. After the first hour we were moving smoothly and gaining confidence, so we did what any team should do when doing a ShipIt in Barcelona – we moved poolside. 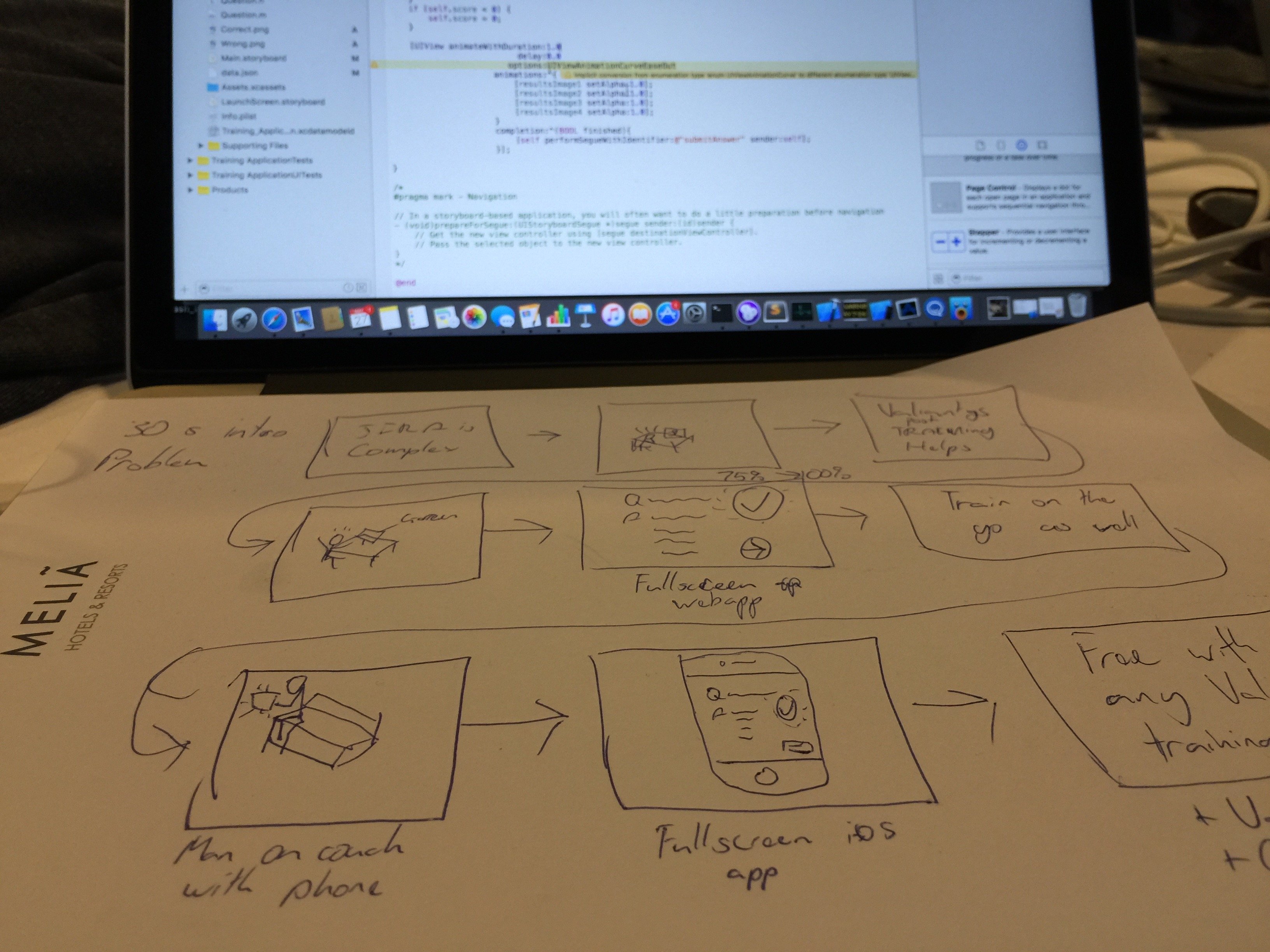 On target at dinner

By dinner time we had made some serious progress – both apps had the primary questions loop working, though not validating or scoring issues. We had a list of questions and answers (along with details such as the correct answer) settled and in JSON, CSV and any other format we’d need. We had Balsamiq diagrams of how the apps should look, and some image assets ready to use. We grabbed some food and some beers and continued working.

While discussing the progress we had made, we realised we needed a reliable way to demonstrate the applications – and we had to do it quickly. The ShipIt presentations were capped at two minutes – this gave us about 30 seconds for an intro, 30 seconds for a demo of each app and a 30 second closing summary. We decided we would video the demonstrations of the apps to embed in the slide deck rather than mess about with switch applications and potentially angering the live demo gods. Feeling extra confident then, we started talking about the idea of doing a commercial instead – show a frustrated admin struggling to remember the training, introduce the apps and then show him feeling accomplished with his work.

We put together a quick storyboard of what should be shown and leave it for the morning – if we had time to mess about with iMovie, we’d do it.

With confidence at an all time high, I decided I had some free time in my schedule. I also had friends from Sydney in town, so I decided to take 1-2 hours to have a quick catch up with them. Unfortunately I didn’t know how early the Barcelona metro closes. Or that available taxis are rare and Uber non-existent. After waiting for a taxi for far too long I walked back to the hotel, nearly three hours after I said I’d be back.

Meanwhile back at the hotel Bertrand had panicked, decided it was all over and that we needed to move to a backup plan. He took everything that we had so far and started putting together a presentation that showed what our lofty goals were, what little we had in terms of an end result, and why it was still a worthwhile project.

Find out what happened next…